skip to main | skip to sidebar

Adobe and Java rival each other as the world’s most exploited software, forcing us to swallow vendor-pushed updates for fear of attack.  Flash, .PDF and Java are all edge-facing in a big way; Flash and Java from web sites, and .PDF both via web content and emaul attackments.  Many software applications auto-generate .PDF files send as attachments with generic message text, so the recipient has no “Turing Test” opportunity to exclude malware-automated vs. legitware-automated .PDF coming from “someone they know”.

So with that in mind, you’d expect both vendors to be abjectly apologetic, going out of their way to make it easy for users to download and apply the constant stream of repairs for their defective code.  Which is more or less true for Java, but Adobe is another story – I found this blog post that sums it up best:

So the quest is on to find offline installers for Adobe Flash and Acrobat Reader, that are:

With Acrobat Reader, this is fairly easy; you can use Adobe’s FTP site.  But that doesn’t help you with Flash.

I found some links from here to bypass the buggy installer...

Links from here appear to work...

…while these were several versions old...

Expect these links to shift around, as Adobe plays the shell game to force us to use their wretched online installers, complete with shoveware that rewards them for our need to fix their junk.

I’ve found it very useful to catch screen shots via PrintScreen key to Irfan View, or using camera with flash off and macro on if pre- or post-Windows, and pasting these into support emails.

So what should be easier than to do the same thing here, in blog posts?

When I last looked at this, it was a fiddly affair, requiring a separate host for the picture files etc. but surely in this pro-Cloud age, those issues should have gone by now.

Apparently not; when trying to publish from Live Writer to this Blogger blog, this failed with “Forbidden”, and remained so until all pictures were removed.

So then I waded through Blogger’s online editor to pull up the pictures into the post.  That worked, for very low values of “work”; pictures were blurry, and the Blogger editor stripped spacing between paragraphs (spacing is always a bit of a sore point with HTML).  What a mess!

Posted by Chris Quirke at 4:10 am No comments: Links to this post

LibreOffice 3.6 “The Selected JRE Is Defective”

Having got past some initial installation hassles that required deleting my LibreOffice profile, I hit a problem with Java, while in Tools, Options.  Here’s how to test this if it happens to you; go to the MediaWiki section in Options…

If you have the problem, you will get this error dialog:

I “fixed” this by installing the 32-bit Java JRE 6 update 33, being the current most updated version of the fading Java 6 line.  It has to be 32-bit as LibreOffuce is a 32-bit application (and fair enough), and it has to be Java JRE 6 rather than 7, because for practical purposes, LibreOffice 3.6 doesn’t work with modern Java JRE 7.5

There’s a lot of “UI pressure” at the Oracle site to download and use JRE 7 rather than JRE 6, which I took to mean 7 is fairly mature and 6’s days are numbered, so I recently switched from the 6 update 31 I was using, to the current 7 update 5.

There’s also a lot of detail on LibreOffice 3.6 and Java JRE 7, claiming that the new Java is supported, why Oracle’s poor installation practices get in the way, and how one overcomes this.

Originally, the LibreOffice code base started as Star Office, which was acquired by Sun and user as a poster child for Java.  This continued with OpenOffice, but since the developers left after the Oracle takeover, the intention is to dump Java.  I’d be very glad if they did, because:

The last is a very old issue that still hasn’t gone away completely.

Posted by Chris Quirke at 3:21 am No comments: Links to this post

I’ve just upgraded from LibreOffice 3.5.2 to 3.6.0, and ran into two sets of problems; the one documented here, and issues with Java.

I didn’t install over my old version as I usually do, because this is noted not to work in the release notes for 3.6…

For Windows users that have LibreOffice prior to version 3.4.5 installed, either uninstall that beforehand, or upgrade to 3.4.5. Otherwise, the upgrade to 3.6.0 may fail.

…followed by this “Runtime Error! This application has requested the Runtime to terminate in an unusual way.” from the Microsoft Visual C++ Runtime Library: 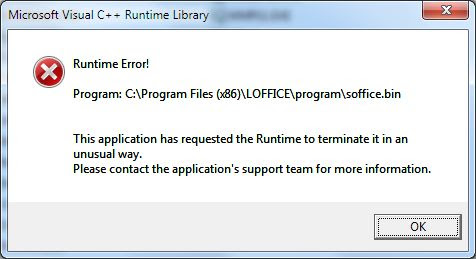 Attempts to uninstall and re-install 3.5.6 or 3.6 again did not fix this issue, including after shutting down and restarting Windows.  Uninstalling the older co-installed OpenOffice (which worked fine with LibreOffice up to 3.5.2) did not make any difference, the same failure pattern remained.

I followed advice to delete my LibreOffice profile, i.e. the subtree within AppData\Roaming for LibreOffice, and that fixed the issue, which may have been linked to a language dictionary I’d added to Open Office.  I didn’t try a more refined fix (i.e. trying to isolate which part of the old profile was bad) as I didn’t need anything in the old profile; I did rename it away (while LibreOffice was completely closed, QuickStarter included) rather than delete it, in case I want to go deeper into this issue later.

Which let me get far enough to hit the Java problem (those who noted “Windows 7 64-bit with JRE 7.5 64-bit” may take a guess at the cause before reading my next post)

Posted by Chris Quirke at 1:42 am 2 comments: Links to this post

This is a more generic issue than what can go wrong with AVG installation, but not the usual user account rights issue.

Windows 7 makes UAC somewhat less obtrusive in various ways, which is generally welcome – but a side-effect can be to silently undo a software installation.

I notice this in particular with LibreOffice, where the expected UAC prompt only appears quite late in the installation process. A possible factor may be renaming the installation executable (e.g. from “Setup.exe” to “NameOfApp.exe”), as this may defeat Windows recognizing it as an installer requiring administrator rights, and thus prompting early for permission to continue.

LibreOffice is an object lesson in why Open Source may be more useful than just being free of charge.  When Oracle took over Sun and cut off the salaries of the Open Office development team, the code itself was beyond their reach – so the product could survive, as continued by the same coders working elsewhere.

One beneficial side-effect of leaving Sun, was a move away from Java, for which Open Office was something of a “poster child”.  LibreOffice is already faster to start up (even without the “quickstarter”) as a result.

Posted by Chris Quirke at 2:18 am No comments: Links to this post

This is not the generic issues of user account permissions or missed UAC prompts; it’s something more specific to AVG’s installation tools.  Here’s what happens:

The bug may be that because the cleanup tool finds no active traces of AVG when it runs, it doesn’t see a need to prompt a restart of Windows.  It then exits, so is no longer there to note the new material added by the fresh AVG installation.

There also may be a bug in the fresh (in my case, offline installer for AVG Free 2012 32-bit downloaded 19 August 2012) installer, if that fails to look for and detect the RunOnce entry created by the cleanup tool.

I’m fairly sure of the mechanism of this issue, because while still in Windows after installing AVG anew, I spent some time in Regedit and noted the RunOnce entry there.  I’m also fairly sure this is not a malware effect, as the PC had not been online since formal scanning with a variety of antivirus rescue CD scanners (via Sardu) and other tools (via Bart).

However, a possible contributor may be the manual clean-up I did before running the cleanup tool and the new install.  This was in XP SP3, and my efforts were limited to deleting the AVG and MFAData subtrees in Documents and Settings, All Users, Application Data.  I did no registry cleanup (either manual or automated), nor did I clear other Documents and Settings or Program Files AVG locations (where leftovers are trivial compared to 100M or so for each of the two I deleted).  I did delete \$AVG from hard drive all volumes, and both old and new AVG installations were to a non-default path in C:\Program Files.

Also, before uninstalling AVG originally, I cleared Virus Vault and logs via the AVG UI, and during the uninstall thereafter, checked Yes to clear the Virus Vault, but not User Settings.  The latter are probably held in the small Application Data locations in the per-user subtrees, where I did not delete anything.  I also (heh, lot’s off “also”, all of which should be declared in case the bug hinges on them) deselect the “security toolbar”, opt out of sending info to AVG, delete unwanted desktop shortcuts and relocate Start Menu shortcuts to a different folder within the same All Users, Programs.

So, steps to avoid this issue:

Some of the re-checking should be redundant, but I’m reluctant to turn my back on it again!

Perhaps the time has come to use Microsoft’s free antivirus instead.  I’m less keen on Avira (the Rescue CD is prone to false-positives) or Avast, but they’ll have their proponents too.  I’ve used and supported AVG for years, but am getting fed up with frequent large new versions, unwanted Do Not Track and “PC Tuneup” stuff (including the especially-unwanted “registry cleaner”) and the way recent versions push users into using these unwanted items.

Posted by Chris Quirke at 1:46 am No comments: Links to this post